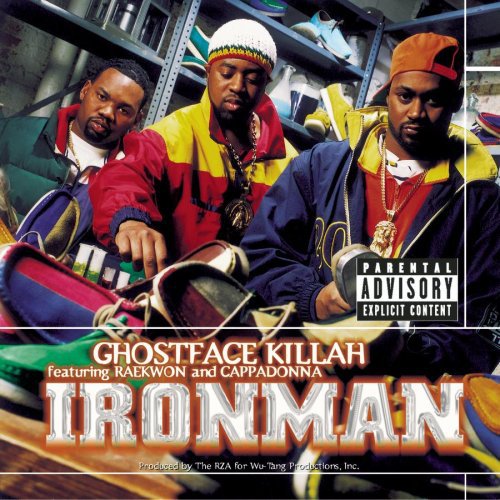 Ghostface Killah, aka Ironman, is already known by hip hop fans as a member of the Wu-Tang Clan. In '96, Ghostface contributed 3 solo singles to soundtrack releases (the most successful being "Motherless Child" from Sunset Park). This is not only Ghostface's first solo album, but it is also the first release on Razor Sharp Records, a joint venture with Epic/Sony and RZA, Wu-Tang Clan's production team. Ironman features guest appearances from Mary J. Blige (first single: "All That I Got Is You," a duet with Blige) and the Delphonics.

''Ironman'' is the solo debut album by American hip hop artist and Wu-Tang Clan member Ghostface Killah, released October 29, 1996 on Epic Records. Though mainly produced by fellow group member RZA, the LP is slightly different to that of other first generation solo Wu-Tang albums, owing much of its thematic scope, mythology and samples from classic 1960s and 1970s blaxploitation, as well as a wider range of soul samples. It is also notable for being considerably more open in its references to the Nation of Gods and Earths and the Clan's beliefs.

Upon its release, ''Ironman'' debuted at number two on the ''Billboard'' 200 chart, and number one on the Top R&B/Hip-Hop Albums chart, selling 156,000 copies in its first week. On January 8, 1997 the album was certified gold in sales by the Recording Industry Association of America (RIAA), and on February 9, 2004, it was certified platinum after sales of one million copies in the United States. Many music critics have praised the album for Ghostface Killah's imaginative lyricism and RZA's style of production, with some revering it as one of the greatest Wu-Tang solo albums of all time. - Wikipedia