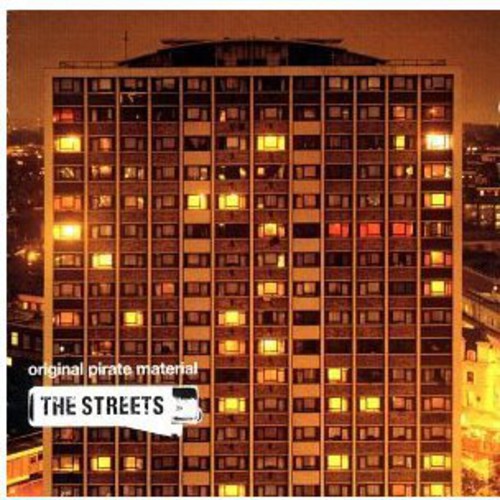 This stunning debut by The Streets, a.k.a. Mike Skinner, melds hip-hop, dub, ska, and dance beats with lyrics that flip from humorous to dark to introspective and back again. "Original Pirate Material" is nominated for this year's Mercury Prize, alongside luminaries David Bowie and Doves, and was certified gold in the UK. Enhanced CD contains videos of "Weak Become Heroes" and "Let's Push Things Forward". "Not since 'Never Mind the Bollocks'"has there been a record that has said as much about being young"-BBC. Parental Advisory.

There may be no deeper hip-hop fans on earth than its U.K. partisans. Theremay also be no one less suited to imitate it. As with the blues before it, mostof the best British hip-hop derived music has tended to sidestep direct emulationin favor of using its breakbeats and sample-logic—even its spoken-not-sungvocals—as building blocks: witness everything from Soul II Soul, Trickyand Massive Attack to jungle, drum & bass and two-step garage. Even fairlyskillful MCs from Monie Love to Roots Manuva have tended to, next to even theirsecond-tier American counterparts, sound somewhat at sea in a music where idiomaticcomfort—not to say bravado—is everything. (London-accented Slick Rickdoesn't count—he was raised in the U.S.)

It would probably be foolish to expect Mike Skinner, the 22-year-old Birminghamnative and London resident who records as the Streets, to sidestep such companycompletely. But he deserves far better. At first, Original Pirate Material,his debut album, may sound like a novelty record. The beats are closer to two-stepthan straight hip-hop, with a raw, made-in-five-minutes feel that keeps themfresh dozens of listens later. Skinner, a kind of cross between Eminem and thegreat, wordy late-70s British rocker Ian Dury, maintains his thick Brummie accentthroughout. Except on the choruses, he doesn't so much glide over the beatas ignore it completely. But once you've heard him once, you never forgethim—or most of the catchphrases he uses and sometimes throws away. "Thisis the day in the life of a geezer," "Sex, drugs and on the dole,""Let's put on our classics and we'll ‘ave a little dance,shall we?," "I make bangers, not anthems," "Once bitten,forever smitten," all indelible.

And, alarmingly, all taken from only two songs. (The first two are from "HasIt Come to This," the other three from "Let's Push Things Forward.")There are a dozen more, and nearly every one is just as good. Like Pulp'sJarvis Cocker, Skinner's keenly observed subject is the British underclass,working for the weekend, relaxing with "videos, televisions, 64's,Playstations… a few herbs and a bit of Benson." "Geezers NeedExcitement" and "The Irony of It All" are, respectively, cold-eyedand farcical portraits of small-town boredom and pub fights. The high pointis "Weak Become Heroes," the most evocative song about clubbing everwritten, a heartbreaking flashback to Skinner's teenage rave days ("Allthe commotion becomes floating emotions/ Same piano loops over/ Arms wave, eyesroll back and jaws fall open"). He may never get the acceptance he deservesfrom the hardcore hip-hop community, but it doesn't matter: he's madethe best debut since Tricky's Maxinquaye, and possibly the album of theyear.
This website uses cookies to personalize content and analyse traffic in order to offer you a better experience.
I accept Learn More
back to top