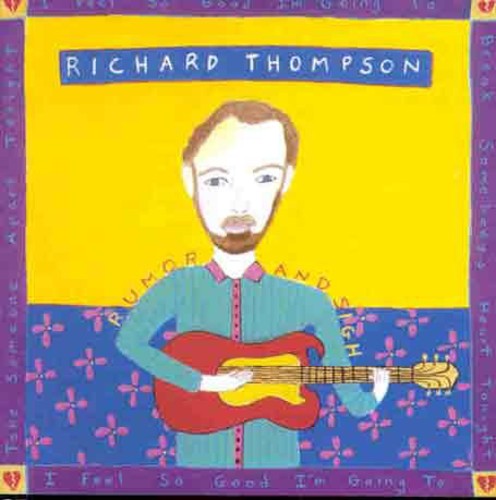 ''Rumor and Sigh'' is an album by Richard Thompson released in 1991.

This album is one of the commercial and artistic high-points of Richard Thompson's career. On its release it garnered the usual critical superlatives but sales were also healthy - helped by Capitol's commitment to promoting an artist they regarded as a prestigious signing and by ''Rumor And Sigh''’s nomination for a Grammy Award in the "Alternative Rock" category (an award eventually won by REM).

The album represents the third collaboration between Thompson and producer Mitchell Froom. It shows Thompson's broad stylistic range to good effect, and includes what has become his best-loved song - "1952 Vincent Black Lightning". "Vincent" is a tale of star-crossed lovers and the motor bike that brings them together set in a traditional English melody and structure and played in a style reminiscent of early 20th century American folk music. It is a perennial favourite and rare is the Thompson concert that does not include this song. The song was subsequently a big hit on the bluegrass charts for Del McCoury, and has become a modern bluegrass standard, well known by fans and even musicians otherwise unfamiliar with Richard Thompson.

"Backlash Love Affair" weds medieval horns to a piece of cod heavy-metal, "Why Must I Plead" combines soul with a country fiddle, and "Keep Your Distance" has a hurdy gurdy solo by Thompson. Thompson also takes a wry dig at himself and simultaneously pays a tribute to one of his influences in "Don't Sit On My Jimmy Shands".

In a 2005 interview on South African radio station SAFM Thompson explained that the albums that he considered "successful" were those where the finished product most closely matched his initial concept. ''Rumor And Sigh'', he said, was one of his most successful records by this yardstick. - Wikipedia