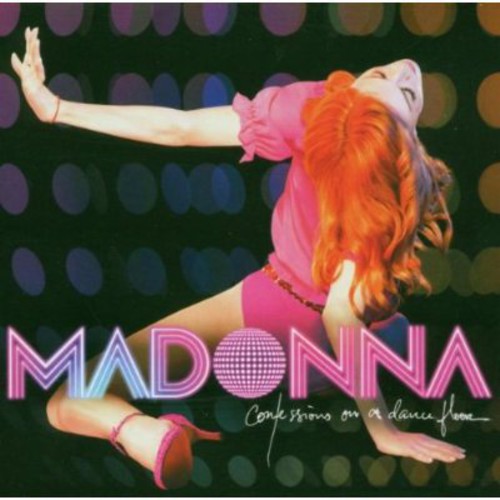 On CONFESSIONS ON a DANCE FLOOR, Madona, the most popular and significant female artist in pop music, returns unapologetically to her roots. For Madonna and music fans everywhere, the all-dance, no-ballad album is a welcome guilty pleasure. Features the single "Hung Up."

''Confessions on a Dance Floor'' is the tenth studio album by American recording artist Madonna. It was released on November 15, 2005 by Warner Bros. Records. The album was a complete departure from her last studio album, ''American Life'' (2003). It included influences of 70s and 80s disco as well as modern-day club music. Initially, she began collaborating with Mirwais Ahmadzai and even recorded two tracks for the album. However, Madonna felt that their collaboration was not going in the direction she desired. At that time, Madonna arranged to write and record additional tracks with Stuart Price while overseeing her documentary, ''I'm Going to Tell You a Secret.'' The album was mainly recorded at Price's home-studio where Madonna spent most of her time during the recordings.

Musically the album is structured like a DJ's nightly set. The songs are sequenced and blended together so that they are played continuously without any intermediate gap. The title arrived from the fact that the tracklisting for the album consists of light-hearted and happy songs in the beginning, and progresses to much darker melodies and lyrics describing personal feelings and commitments. Songs on the album use samples and references of music by other dance-oriented artists like ABBA, Donna Summer, Pet Shop Boys, Bee Gees, and Depeche Mode. Madonna incorporated references of her older work as well. One of the tracks called "Isaac", was negatively received by some Israeli rabbis who claimed that the song was about their noted sixteenth century Kabbalah scholar Isaac Lurier (Yitzhak Luria in Yemeni Arabic). However, Madonna explained that the song was named after Yitzhak Sinwani, who appeared as a featured vocalist for the song.

Contemporary critics lauded the album calling it a return to form for Madonna. They complimented the fact that Madonna chose to seek inspiration from the dance music which had made her the noted star she is. Price's musical direction was also praised with some reviewers giving the full credit for the album to him. After its release, the album debuted at the top of the charts in most nations. It became Madonna's sixth number-one album on the ''Billboard'' 200 albums chart. Worldwide, ''Confessions on a Dance Floor'' has sold 12 million copies. She was also honored with a Grammy Award for "Best Dance/Electronic Album" in 2007, as well as "International Female Solo Artist" at the 2006 BRIT Awards. The supporting tour for the album, known as Confessions Tour, became the highest grossing tour ever for a female artist, at that time.

Four singles were released from the album. "Hung Up," the first single, became Madonna's most successful single worldwide by topping the charts in forty-five countries, thus earning a place in the Guinness Book of World Records. It was followed by "Sorry" which was another chart topping success. It became Madonna's twelfth number-one single in the United Kingdom. "Get Together" and "Jump" were released as the third and fourth singles respectively, both becoming successful on the dance charts. - Wikipedia