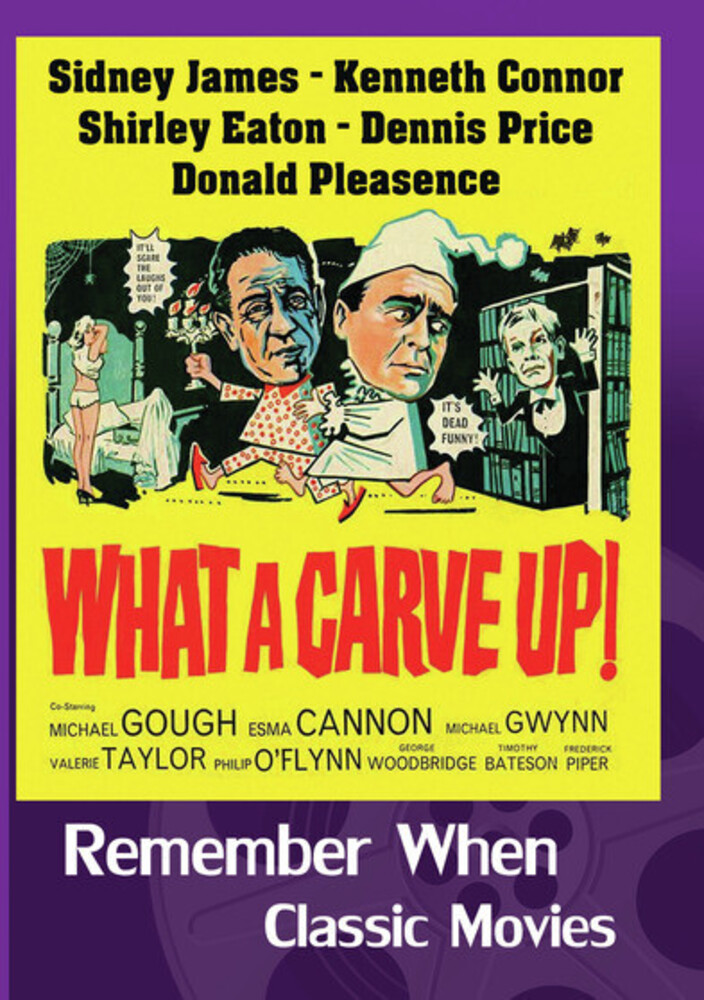 What A Carve Up!
Artist: What a Carve Up
Format: DVD
New: OUT OF STOCK. Contact us for availability!
Wish

What a Carve Up! Is a 1961 British comedy-horror film starring Sid James, Kenneth Connor and Shirley Eaton. The film was loosely based on the novel The Ghoul by Frank King. The relatives of Gabriel Broughton (Phillip O'Flynn) are summoned to Blackshaw Towers, an old, isolated country house in the middle of the Yorkshire moorlands to hear the reading of his will. Gabriel's nervous nephew Ernest Broughton (Kenneth Connor) brings along his flatmate Syd Butler (Sid James) for support. At the large, gloomy mansion they meet Guy Broughton (Dennis Price), Ernest's cousin, Malcolm Broughton (Michael Gwynn), a piano player who claims everyone is 'quite mad', Emily Broughton (Esma Cannon), a dotty old woman who believes the First World War is still on, Linda Dixon (Shirley Eaton), Gabriel's nurse, and various assorted other relatives. The solicitor Everett Sloane (Donald Pleasence) reveals that they have all inherited nothing except for Linda, who is bequeathed Gabriel's medicines and syringe, much to her amusement. Suddenly the lights go out and the dead body of Dr. Broughton (George Woodbridge) is discovered. Syd believes this was a murder, but when he tries to phone the police he discovers the telephone lines have been cut. With everyone stranded for the night, Sloane recommends everyone lock themselves in their rooms, but Ernest gets lost and enters Linda's room by mistake. Syd and Ernest end up sharing a room and when Ernest goes to the bathroom, someone tries to stab the sleeping Syd, but he resists. Meanwhile, Ernest and Malcolm join in a piano duet when Malcolm gets stabbed in the back. Ernest's screams bring about the others and much suspicion and mayhem result in the deaths of several more guests. Finally, Police Inspector Arkwright (Phillip O'Flynn) arrives, but is sceptical that murders have been committed as there are no bodies - until Guy's body is found. More mayhem ensues as the remaining relatives are all considered to be murder suspects. Although, let it never be said that the chances of a will being read without blood being shed are pretty slim as this comedy-horror classic is a great example of just that!