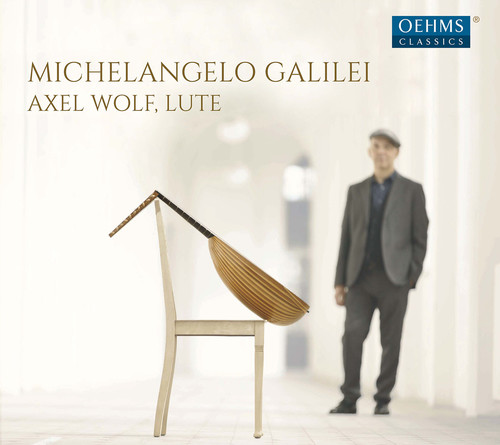 Michelagnolo/Michelangelo Galilei was born in 1575 as the second son of the influential music theoretician Vincenzo Galilei and was the younger brother of Galileo Galilei. Michelangelo, who was considered a musical prodigy during his youth, embarked on the career of a professional lutenist and, following several stations in Poland and Lithuania, entered the service of the Court Orchestra of Duke Maximilian I of Bavaria in Munich on 16 February 1607. Axel Wolf presents here Galilei's Primo libro d'intavolatura di liuto, Munich 1620. The German lutenist, Axel Wolf, studied with Hans Michael Koch and Rolf Lislevand. As a member of the ensemble "La Sfondrata" he was a prizewinner at the 1992 International Competition for Early Music Ensembles in Utrecht, Netherlands. In the course of his concert career Axel Wolf has made appearances at international festivals in Boston, Bruges, Utrecht, Prague, Edinburgh and Innsbruck, as well as appearances in Rome, Tokyo, New York and Tel Aviv as soloist or member of ensembles such as Musica Fiata Koln, Freiburger Barockorchester, Ars Antiqua Austria and The English Concert London.