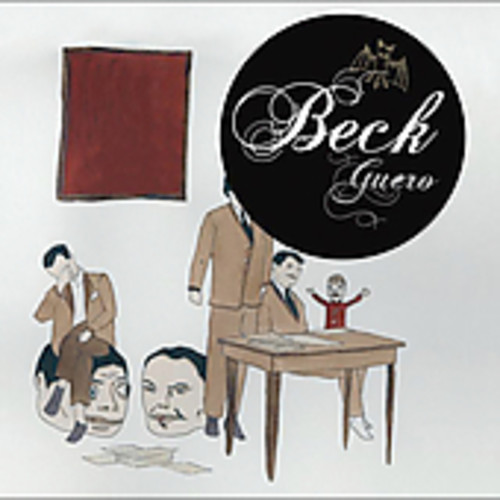 Three years after the critically acclaimed and heartwarming opus SEA CHANGE, Beck retuns with his most diverse, accomplished and compelling work to date: GUERO. The first single "E-Pro."

''Guero'' is the ninth (and sixth major-label) studio album by American alternative rock artist Beck, first released in March 2005 on Interscope Records. It debuted on Billboard's Top 200 Album chart at #2 (where it went gold), and in the UK at #15 (where it went silver). To date, this is Beck's highest charting CD. It is seen by many reviewers as a return to the style of ''Odelay'', his 1996 album, mainly because this album, like ''Odelay'', utilizes production duo the Dust Brothers. It also recalls ''Mutations'' in places with its Brazilian influences. "E-Pro" was the album's first single, with "Girl" as the follow-up. As of July 2008, ''Guero'' has sold 868,000 copies in the United States. - Wikipedia

Pop quiz time: Has anyone reading this really had their lives changed by Odelay? Right--didn't think so. For an album that was so widely acclaimed as a visionary, syncretic masterwork, its genre-splices haven't held especially well over the past decade; today, it sounds as much like a signpost of mid-'90s mush-headedness as any failed dot-com. So does Beck's subsequent deification as master of all genres, when he was basically good at being spazzy and subliminally pissed off (1994's Mellow Gold and Stereopathetic Soul Manure) or a genial, slightly weird singer-songwriter (1998's Mutations). But Odelay had memorable songs and some energy. The new Guero feels an awful lot like a conscious attempt to retread the latter, taking from all over the place and squeezing the whole thing through a tube marked "post-collegiate middlebrow." He's even blatant about it a couple of places--if he's always had a thing for electro-rap of the "Where It's At" variety ("Hell Yes"), the resemblance between the guitar riff of "Rental Car" and the Them lick he pilfered for "Devil's Haircut" is a bit queasy. The other difference is that most of this set is awfully boring--you're left wondering not what Beck's willfully surrealist lyrics are talking about, but why he's bothering.