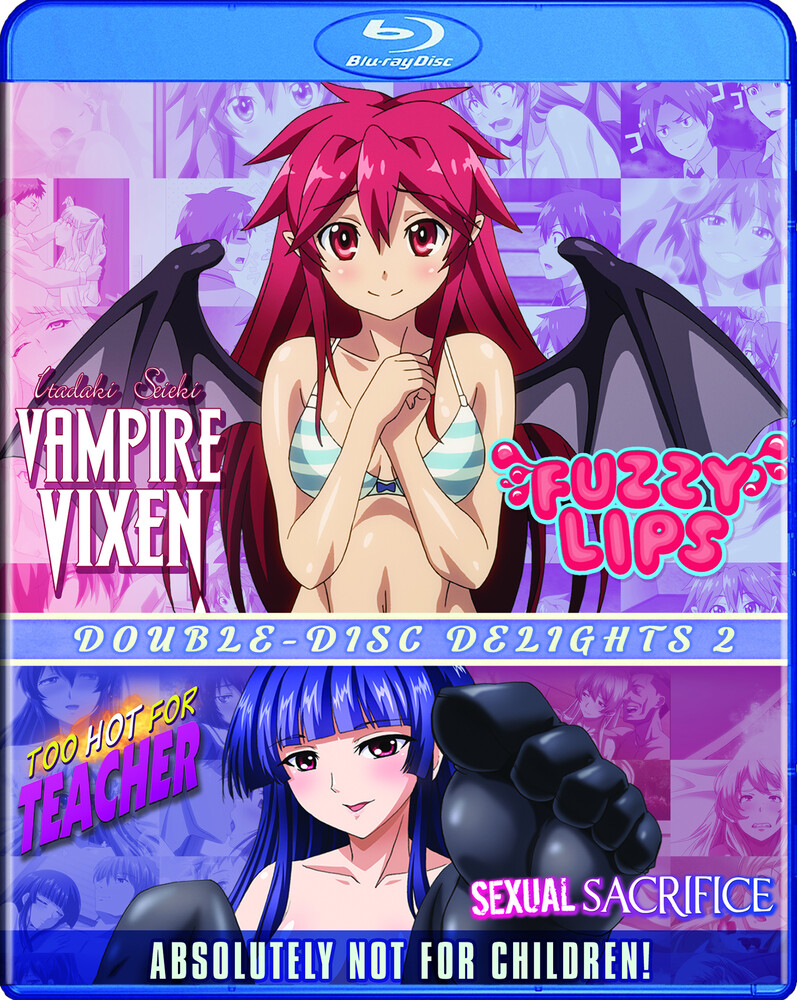 VAMPIRE VIXEN is based on Doumou's popular hentai manga Itadaki! Seieki! A male student named Kanzaki receives an anonymous love letter from a secret admirer who wants to hook up with him. He's not sure what to expect on his first rendezvous but he would have never guessed to be greeted with a swift kick to the face! Meet Mari Setagoya, a sexy, confused and ravenously hungry succubus/vampire hybrid. After sucking some of his blood, Mari confesses to Kanzaki that she never truly acquired a taste for the red stuff. Since she is required to feed on bodily fluids for sustenance, they mutually agree on an alternative substance that Kanzaki is more than happy to supply!FUZZY LIPS is based on the adult manga by INU and follows a young female student named Katakura Kon who enters into a forbidden, hyper-sexual relationship with her homeroom teacher, Mr. Kurosawa. Soon, Kon stops attending classes and moves in with the teacher who tries hard to keep the arrangement a secret. Since neither is willing to verbally express their true feelings to each other, their frustration heightens and they resort to more and more intensive carnal explorations!TOO HOT FOR TEACHER is based on a popular hentai manga by Tsukiyoshi Hiroki and presents a humorous harem scenario as a quartet of lovestruck female students offer their bodies and souls to their beloved male school teacher in a series of off-beat, competitive sexual encounters that truly test the teacher's physical endurance and frayed nerves. Things get considerably more challenging as each student frantically competes to become the first to bear the instructor's child! SEXUAL SACRIFICE is an OVA based on the doujin manga by Kemigawa Mondo that chronicles the darkly erotic campus escapades of Yurika, a beautiful rich college girl, who meets Yuusuke, a shy, awkward male student. Together they initiate a sincere, warm relationship before fate rudely intervenes! Suddenly, Yurika becomes aloof and misses class. One day, Yuusuke sees her whisked away into a mysterious limousine to report to the "Master." Distressed and heart-broken, Yuusuke soon receives a mind-shattering live video stream only to witness Yurika's graphic sexual sacrifice. She willingly offers up her voluptuous body and dignity in exchange for sparing her father's failing business from a hostile takeover by a greedy CEO simply known as the "Master." Will Yurika survive the ordeal and her dark descent into degradation? Will Yuusuke ever see or embrace his true love again?