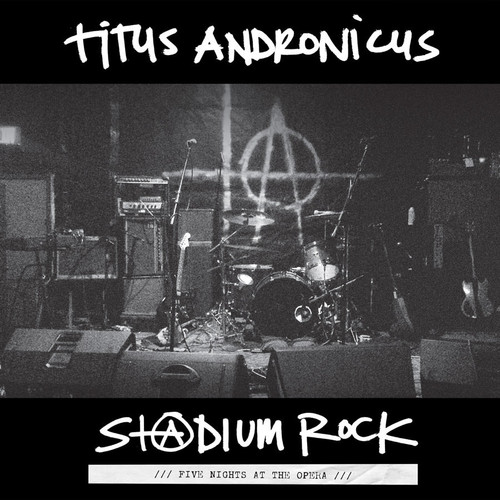 In July of 2015, noted rock band Titus Andronicus [hereafter +@] made history, twice. The wider world shook upon the impact of The Most Lamentable Tragedy [hereafter TMLT], the triple-LP rock opera that immediately established itself as the most ambitious punk record of all time, a distinction challenged only by a foolish few. Meanwhile, in the hallowed halls of Shea Stadium, New York City’s longest-running active all-ages DIY space, +@ was doing the unthinkable again, becoming the first band in the history of NYC DIY to sell out five consecutive nights at the same venue. While these epic shows ostensibly served as a record-release celebration for TMLT (as well as an uproarious shindig for the 30th birthday of +@ singer-songwriter Patrick Stickles), they shattered the limits of mere promotional exercise and reached mythical status. Sadly for the wider world, you had to be there… until now. +@ and their patient patrons at Merge Records are pleased to announce the new live LP, S+@DIUM ROCK: Five Nights at the Opera, a record which will allow fans everywhere their chance to relive the auspicious occasion from the comforts of their own home. +@’s position as the most thrilling live act in rock and roll has long been etched in stone, but never before has that riveting energy been captured on wax as it is here. The A-side to S+@DIUM ROCK revisits some of TMLT’s most celebrated hits in a newly concise context, stripping away all studio wizardry until only the primal passion remains. The B-side offers fresh electric arrangements of the largely acoustic fifth act of TMLT’s rock opera narrative, presenting a new perspective on the material Tiny Mix Tapes praised for “emotional intensity… unrivaled anywhere in rock music,” as well as debuting the previously unreleased TMLT outtake, “69 Stones.” Taken as a whole, S+@DIUM ROCK is a whirlwind journey through a moment in time never to be repeated, preserved for future generations starving for “the real deal.” The live LP will also be accompanied by a full-length concert film, available to stream online, which will serve to further immerse the consumer. Take an early taste of this sensory assault today with the world premiere video of +@ performing “I Lost My Mind” and “Fatal Flaw” as one of their signature, seamless medleys.