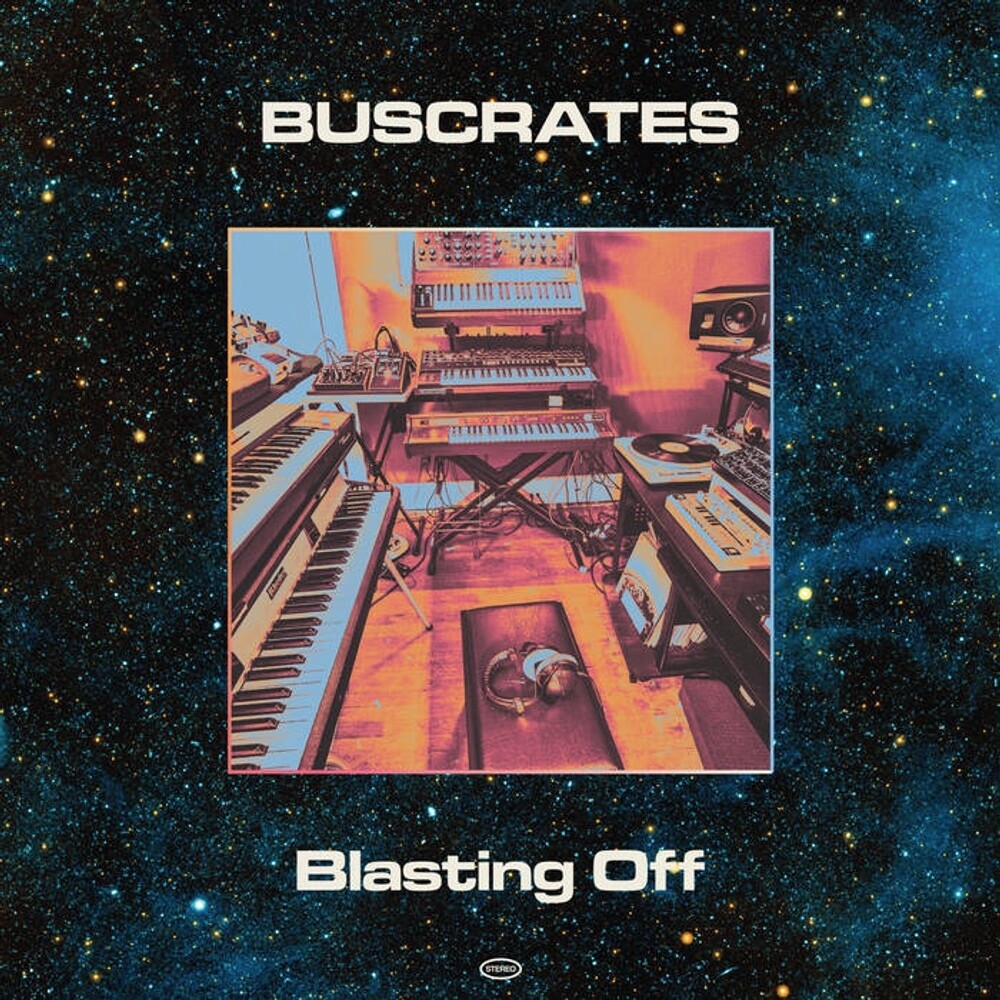 Blastin Off
Artist: Buscrates
Format: Vinyl
New: OUT OF STOCK. Contact us for availability!
Wish

Neo funk rising star Buscrates aims high with Blasting Off, his first full-length album. The Pittsburgh-based keyboard cosmonaut has been grabbing ears since his days hooking up beats with the hip hop crew East Liberty Quarters, but after slinging spicy one-offs to a slew of hot labels like Omega Supreme, Voyage Funktastique and Razor N Tape (as well as contributing production to Wiz Khalifa and Curren$y's 2009 project), the time has come for a full-length featuring his growing modern funk repertoire. "I'm a '90s hip hop dude, but I grew up on that '80s funk stuff," Buscrates acknowledges. DJ gigs provided a working knowledge of the jams that moved a contemporary crowd, and as his collection of keyboards and drum machines grew he began blending the best of both decades with his personal futuristic edge. "I was nice on the MPC but I wanted to have a little more dynamic range with what I was doing," he notes. The self-described "certified synth geek" was soon branching into sounds that recalled '80s legend Kashif crossed with the hip hop bounce of DJ Spinna, and the modern funk community took notice. For his first full-length, Buscrates has crewed up with an ace team of collaborators, featuring vocalist Sally Green on the bouncy lead single "Lost And Found" and "Eight Nine." Kate Moe Dee takes over mic duties for the second single, "How Ya Gonna Do It," a slinky groove that slides in place alongside groups like the Sunburst Band and Rene & Angela as an exemplar of sophisticated R&B. Adding to those credentials are the sultry vocals of Anda on "Believe," but of course, it wouldn't be a Buscrates set without some stank, neck-snapping instrumentals. "Five Days" and "Sure Shot," both collabos with the drum technician DJ Epik, will rattle speakers and have already been lighting up message boards on recent Buscrates DJ sets. Round things out with some easy gliding, jazzy funk ("Turn It Out" with Brothermartino on flute and "Evergreen" featuring Tony Ozier) and you've got all the ingredients for a high-flying cosmic ride with Buscrates at t L-BJ31 11/6/2020 LP Potatohead People - Mellow Fantasy (LP) BASTARD JAZZ RECORDINGS USA N XXX 12.50 19.98 708630008198 ELECTRONIC/JAZZ N NO EXPORT TO EU/UK On their third full-length release, Potatohead People widen the frame of their progressive musical vision and deliver a far-reaching yet approachable set of moods and grooves. Mellow Fantasy continues to showcase the trademark instrumental prowess of the duo and their ease with the loose but hard-hitting drum style brought to the fore by Jay Dee's influential productions, but goes well beyond basic boom bap bread and butter, with singer-centered R&B and uptempo bumps sharing the stage. Beginning in 2008 as a Vancouver-based hip-hop production team, Potatohead People (Nick Wisdom and AstroLogical) have collaborated with a fantasy league of MCs, including Frank Nitt of Frank'n'Dank (the 2013 breakout jam "Back To My Shit"), Illa J (producing an entire album for J. Dilla's younger brother) and the late Phife Dawg (the beloved A Tribe Called Quest co-founder's last recorded verse was over one of their beats). Setting them apart from other Dilla-influenced beatmakers is the way they push the scope of the style, working the corners with their own unique touch. At it's most basic, "the goal has always been making really dope loops," they explain. By using slices of their own rough instrumental ideas, finding "a chord progression or texture that you can hear again and again and never question it," they've taken this fundamental concept and elevated it to new levels of melodic, harmonically complex music. A jazz-like responsiveness to the input of collaborators is a key component of how the team works. "We like to get the artist involved when the beat is an early idea, and build the beat around the vocals, getting inspired by what they do." On Mellow Fantasy, they had some impressive inspiration. Pos from de la Soul immediately connected with "Baby Got Work," a sophisticated slap that went through several iterations before settling into it's ultimate form. Appropriately, the song's diligent construction echoes the ethic of the grind in the clear-eyed, precisely dovetailed lyrics fans have come to expect from the Daisy Age don. "Baby Got Work"