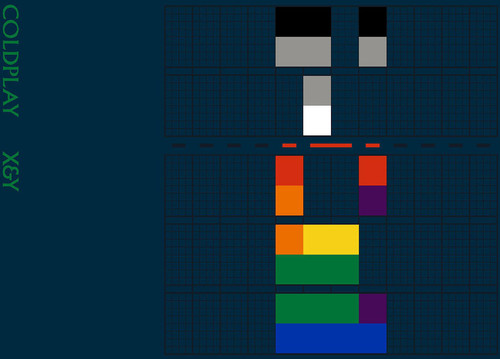 Coldplay's highly anticipated new album X&Y is another leap forward for them. Coldplay has earned four Grammy's and have sold a combined 20 million albums for their two pevious albums. Features the single "Speed of Sound."

''X&Y'' is the third studio album by English alternative rock band Coldplay, released 6 June 2005 in the United Kingdom via the record label Parlophone. The album, which features influences of electronic music, was produced by the band and British record producer Danton Supple. British record producer Ken Nelson was supposed to produce much of the album, however, many songs written during their sessions were ditched due to the band's dissatisfaction. The album's cover art is a combination of colours and blocks, which is a representation of the Baudot code.

In March 2004, Coldplay announced details in the working of ''X&Y''. Initial plans were to stay out of the public eye throughout the year. Vocalist Chris Martin stated, "We really feel that we have to be away for a while and we certainly won't release anything this year, because I think people are a bit sick of us." This plan, however, was not due to the pressure their second album, ''A Rush of Blood to the Head'', had induced but they were trying "to make the best thing that anyone has ever heard".

The album has been considered a landmark achievement of the band, topping many charts worldwide, including the United Kingdom and United States, the latter being their first. With accumulated sales of over 11 million units, ''X&Y'' was the best-selling album released in 2005 worldwide. Reviews for ''X&Y'' were mostly positive, but critics of the album felt it did not quite meet the standards of its predecessor in 2002. The album has spawned the singles "Speed of Sound", "Fix You", "Talk", "The Hardest Part", "What If" and "White Shadows". - Wikipedia

"We never change, do we?/  No, no," Chris Martin sang back in 2000 on Coldplay's debut, Parachutes. No kidding. Five years, two albums, and one tabloid-friendly celebrity coupling later, nothing seems different for Martin and his band of sullen Englishmen. They wallow in the same heartsick lowlands and scale the same uplifting peaks they always have. Like the variables in its title, X & Y is identity-less, completely interchangeable with its predecessors, Parachutes and 2002's A Rush of Blood to the Head.

But do we really want a radically reimagined Coldplay? They're so good at what they do. On "Fix You," X & Y's swooning high point, a church organ strikes up a matrimonial march, guitars shimmer like
they've been plucked from U2's "I Will Follow," and Martin repeats comforting phrases like "lights will guide you home" and "everything's gonna be all right." It all builds to a glorious climax of chorale and stately piano that recalls the heart-stopping beauty of the band's breakout single, "Yellow." Sure, "Fix You" is predictable and clichden-that's precisely why it works.

Coldplay's music is a sonic security blanket. Seamless melodies float around in amniotic atmospherics, verses build up the exact amount of tension necessary to be released during the chorus, and the lyrics are vague enough to soundtrack both latte purchases and late-night confessions. If they could, woozy songs of yearning like "Swallowed in the Sea" and "A Message" would grow arms and give you a hug; "My song is love/ Is love I know/ And I've got to get that message home," Martin moans on the latter. Nobody wants Coldplay to get crunk, least of all themselves.

Nonetheless, it must be said: Coldplay can be pretty damn boring. X & Y drags up until "Fix You," with drummer Will Champion on mid-tempo, tick-tock autopilot, and enough lugubrious strings to choke a junior high orchestra. The first single, "Speed of Sound," is a bloodless rewrite of "Clocks," which wasn't too exciting in the first place. "Twisted Logic," a frustratingly vague bit of anti-authoritarianism, borrows a melody from Radiohead. If there's one thing Radiohead isn't known for, it's their melodies.

The only song that approaches the grandeur of "Fix You" is X & Y's hidden track, "'Til Kingdom Come." Originally written for Johnny Cash, it's a simple, majestic country-gospel number recorded live in the studio, and it's pretty great. But Coldplay don't have to be great to succeed. They just have to be Coldplay.