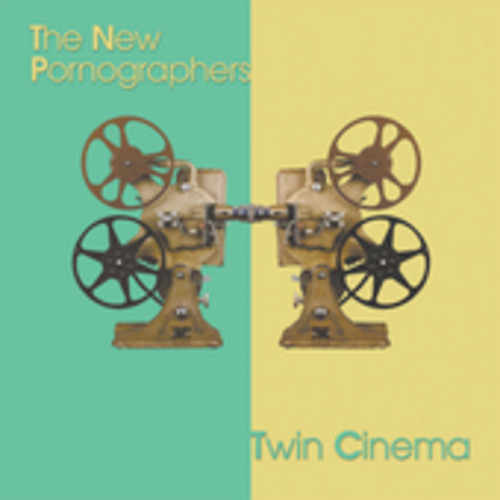 The 3rd album from Vancouver's pop maestros continues to feature neko Case and Dan Bejar (Destroyer), as well vocalist Kathryn Calder and Nora O'Connor. These songs veer more toward the rocking and the personal than the sugar of earlier works. Chief singer/songwriter A.C. Newman has absorbed not just the mechanics of classic songwriting, but the heart, while indulging his admiration of demented current band like Fiery Furnaces and Frog Eyes. Expect to hear influences from the Moody Blues. Tubeway Army, Wings, Eno, the Stranglers, 10cc, the and other greats, all filtered through Newman's warped world view. "The best pop band alive - CMJ Montly".

''Twin Cinema'' is the third album by Canadian indie rock group The New Pornographers. It was released on August 23, 2005. The album was shortlisted for the 2006 Polaris Music Prize. - Wikipedia

How ironic is it that the female voice of a band called the New Pornographers won Playboy's "Sexiest Babe of Indie Rock" poll in 2003? Answer: kinda-sorta. (She declined to pose, for what it's worth.) But thankfully, we've all more or less swept that strange chapter of hipster history under the rug and are now free to (ahem...) get off on the tunes. This time around there are two additional lady leads, Kathryn Calder and Nora O'Connor (clearly contenders for the inevitable "Sexiest Potential Three-Way in Indie Rock" piece), and the Vancouver collective's saccharine singalongs are far less joyous. Eccentric leader A.C. Newman's classicist tastes contribute to a somewhat more foreboding atmosphere-dude's a renaissance man of the highest order. We'll probably see his Playgirl spread any month now. Yep, annnnnyyyyy month...