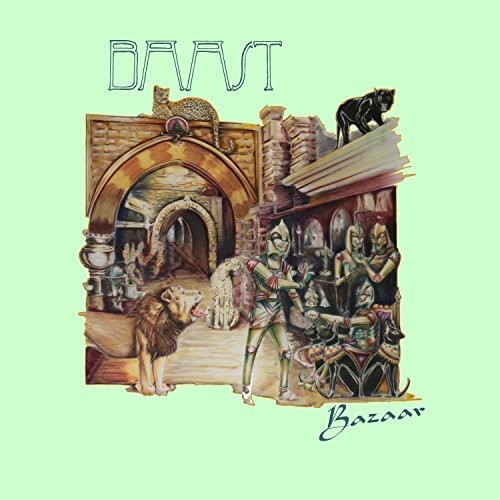 Baast returns with a follow-up to their cosmic jazz funk opus ''Dimensions'', with another set of esoteric ''Kosmiche Musik'' on their new offering ''Bazaar''. Channeling the same energy filtered through a more worldly vibe, the heavy focus is on polyrhythmic percussion producing a decidedly Middle Eastern flavor in a similar vein to Krautrock standouts Embryo and Passport. The brainchild of R. Scott Dibble and DJ Johnny Basil, Baast's live performances are a mix of theatrical rock, jazz improv, and extended funk sojourns once they lock into a groove. 2016 has been a coming out party of sorts for once-underground hero DJ Johnny Basil. After a 20 year hiatus from producing music, hunkering down and delving deep into his esoteric studies while amassing one of the more impressive record collections focused on library music, his ascension has been ignited by his exposure to a young and eager audience as a tour DJ for cult surf-rock crusaders The Growlers. Leaving crowds mesmerized throwing down hard Disco and Funk while exploring the groove alongside them gyrating and slithering shirtless on stage. Drawing a visually striking resemblance to Iggy Pop, and sartorially decked in '70s vintage regalia, he's inspired a write-up from Vice outlet Thump dubbing him ''The Man You Wish You Were'', putting him in the running as a real-life ''Most Interesting Man In The World''. Fresh from being named by the OC weekly staff as ''Best Local Celebrity of 2016'' and loaded with several new projects outside of Baast including his recently released excursion into Nu-Disco with the aptly named Basil & Rogers and Sleaze/Glam Rock outfit Kandi Jones, as well as several upcoming appearances in music videos and fashion shoots, DJ Johnny Basil's long-overdue ''shine'' is only destined to burn that much brighter.