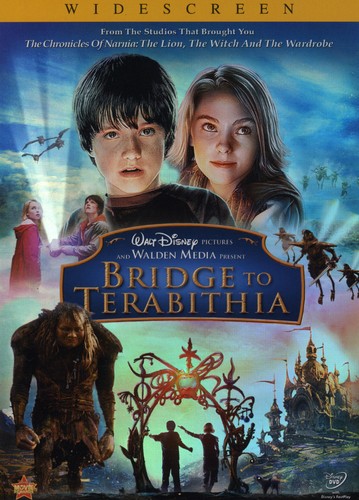 Animation master Gabor Csupo directs his first live-action film in this adaptation of the novel The Bridge to Terabithia, by Katherine Paterson, whose son David co-wrote the screenplay and serves as a producer.

Animation master Gabor Csupo directs his first live-action film in this adaptation of the novel The Bridge to Terabithia, by Katherine Paterson, whose son David co-wrote the screenplay and serves as a producer. Jess (Josh Hutcherson) is misunderstood. Despite Jess' talents as an artist, the school bullies pick on him, his father (Robert Patrick) belittles his dreams, and his four sisters invade his space in the family's cramped house. Jess' bleak world changes when Leslie (Annasophia Robb) moves into the house next door. Bright, creative and outspoken, Leslie also finds herself an outsider in their school. Soon the two are thick as thieves, spending their after school hours exploring the woods beyond their backyards and on the others side of a creek, which Leslie deems the kingdom of Terabithia. Here, they create their own magical world, complete with a Dark Master and his minions, dragonfly soldiers, giant trolls and a treehouse fortress. In Terabithia, the two friends let their imaginations run wild and control their destiny, far away from school bullies and the pressures of adolescence.

Hutcherson and Robb are well cast as Jess and Leslie in this coming-of-age tale. Hutcherson handles both the melancholy intensity and unbridled joy of his character beautifully, and Robb's smile and charisma are infectious. Zooey Deschanel also stars as Miss Edmunds, the music teacher who befriends Jess. Parents should read the book or learn more about the story before taking young children to see this film, as the story includes not only some scary creatures, but also the death of a young person. Terabithia and its creatures are created by WETA Digital LTD, the same company that did the effects for the LORD OF THE RINGS trilogy and KING KONG.

"[W]ith a positive message about seeing the troubled person behind the bully and the importance of keeping an open mind....A sweet family-friendly film..." USA Today - Claudia Puig (02/16/2007)

"[With] the powerful and bittersweet spirit that has, for decades, continued to make the story a favorite." Box Office - Wade Major (04/01/2007)

"An engaging film with its big heart in the right place....What a pleasure for a children's film to offer nothing but an honest depiction of emotions..." Sight and Sound - Anna Wood (05/01/2007)
This website uses cookies to personalize content and analyse traffic in order to offer you a better experience.
I accept Learn More
back to top